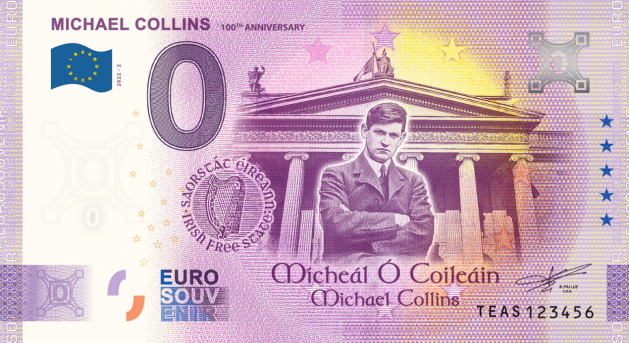 A meaningful gateway to the creation of a free Ireland in 1937, the Irish Free State came about following the hotly-contested Anglo-Irish treaty of 1921, the precursor to the IFS Constitution act. The treaty of 1921 led to the Irish Civil War, which resulted in the death of Collins, as well as hundreds of forces on both sides. In the aftermath of the Civil War, Constitution Act provided the framework for a new relationship between the Irish Free State, the British Crown, and Northern Ireland, which opted out of the treaty. The Free State would last for 15 years, until the Constitution of Ireland was adopted in 1937.

More on Michimich.com
"The years of the Irish Free State saw the adoption of a number of important symbols of Irish independence, including the first printing of the Saorstát pound in 1927, which would evolve into the Irish Pound," says Euro Note Souvenir Ltd Managing Director Peter Schneider. "We felt it was appropriate to honor this period of hard-fought freedom with the creation of a commemorative note of our own."

This is the second note that Euro Note Souvenir has crafted regarding Collins' period in history. The first, a batch of 5,000 commemorative notes honoring Michael Collins, was released in August of 2020, and has already sold out.

The Irish Free State commemorative note has been officially licensed by the European Central Bank and printed by Oberthur, the French facility that prints the euro. It has the look and feel of a euro, along with a watermark, holographic protection and UV-responsive tactile marks. Like the Collins note, The Irish Free State note will be a batch of only 5,000 notes. However, unlike the earlier Collins note, 2500 of the Irish Free State notes have been promised to dealers and collectors, which means they will be sold at coins and collectible fairs across Ireland. Only half of the notes will be available to purchase on the company's site.

More on Michimich.com
"Considering that all of our previous Michael Collins notes sold out, we expect the IFS notes to go very quickly," says Schneider. "It's not very often you get to own a commemorative piece like this, and collectors will want to get their hands on this one before it's gone."