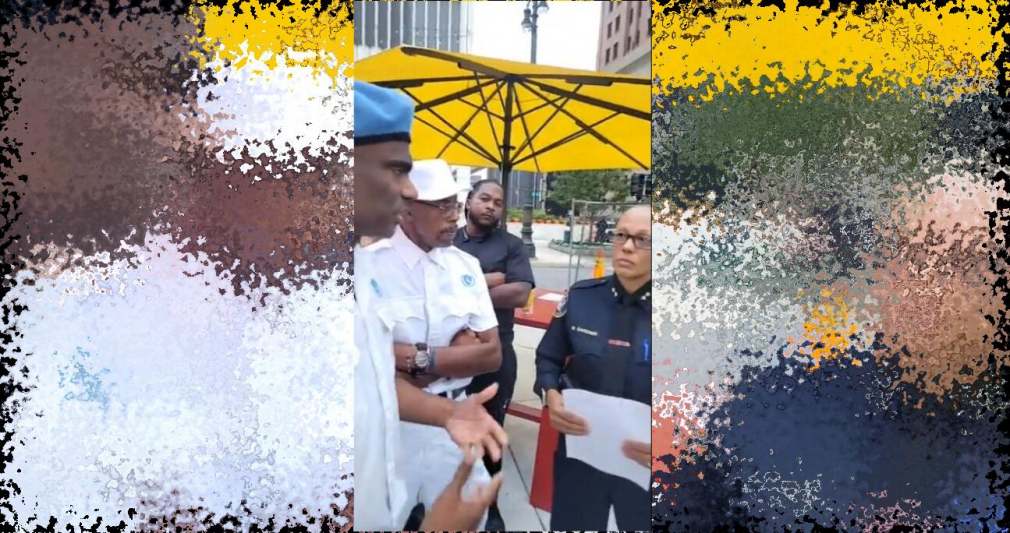 Detroit police officers were lawfully forced to retreat by human rights officers who seek to replace them.
DETROIT - Michimich -- In the most corrupt city in the most corrupt state (according to federal attorney report) there is a "humanitarian intervention" going on to stop government abuse. A video went viral on social media platforms including Facebook and YouTube gaining millions of views as Ramzu Yunus and other human rights officers stopped a police force in its tracks and sent them away.

The human rights organization, Human Rights Policy Officers, is in Detroit to advocate for human rights to be asserted by the African American (labeled Afrodescendants in international law) residents who are victims of gross human rights violations by city officials. By asserting their human right of self-determination, residents can disband the police force, suspend corrupt officials and reclaim the homes that were illegally foreclosed as well as occupy abandoned city-owned property.

More on Michimich.com
The Detroit administration has been found guilty in court of illegally charging over $600 billion in taxes and evicting over 100,000 residents. Local organizations have been trying but failing to get a redress for these and other unlawful acts. "We will continue to fail when seeking a remedy from the same entities that are guilty of the violations. We should follow the wisdom of Dr. Martin Luther King Jr. and Malcolm X who over 50 years ago suggested that we take our grievances out of local jurisdiction or civil rights and treat them as human rights violations. The people can then correct the problems themselves without any permission" says human rights policy officer Ramzu Yunus.

The organization is currently recruiting officers for Detroit. Interested persons are invited to call the human rights law hotline (888-999-6530) or register via the internet.
https://youtu.be/janLxgmncX4