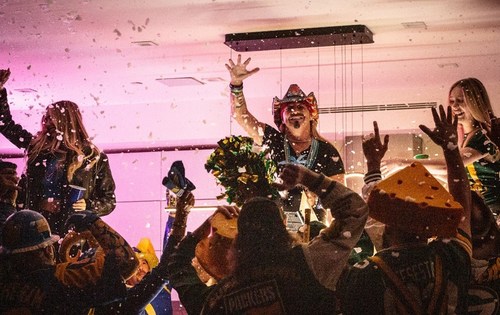 CALABASAS, Calif., Dec. 20, 2022 PRNewswire/ -- For Michaels, music and sports just go together. "Music is an absolute universal language meant to unite us not divide us. For myself, the combination of sports and music is incredibly powerful."

States the music icon, who made an appearance on last nights Monday Night Football open alongside friend and The Office alum, Brian Baumgartner and the Packers very own Aaron Rodgers. When Sammy Silver, ESPN CCU Director, was asked to deliver a high-energy party opening, his mind went straight to Michaels whose song "Nothin' But A Good Time" he personally picked for its high-energy, party feel.

"When we started talking about producing the open, I knew I had to get Bret Michaels alongside Brian Baumgartner. Brian is an incredibly funny and talented actor and Bret is his friend and party wingman," said Silver. "Bret knows how to bring the party. This was one of the most fun segments we have ever produced." Michaels brought his entire family and friends to party alongside LA Rams and Green Bay Packers fans for the open.

More on Michimich.com
ESPN and Silver also delivered a special surprise delivering a cameo from Aaron Rodgers during the spot, making it a piece that had football and music fans calling the 'best open ever" and an "elite way to open Monday Night Football."

The spot can now be seen on Michaels website BretMichaels.com

Following his storied run on the highly successful Stadium Tour this past summer, Michaels will embark on his select date Parti-Gras Tour with Night Ranger, Mark McGrath, Steve Augeri and Jefferson Starship, starting Thursday July 13th in Detroit and the legendary Pine Knob Amphitheater. Additional dates include a stop at Michaels' hometown amphitheater, The Pavilion at Star Lake in Burgettstown, Pennsylvania, as well as stops in Gilford, New Hampshire and Camden, New Jersey to name a few.

Born in Butler, Pennsylvania, Michaels, the son of a veteran and steel worker, will be a featured guest for the SiriusXM Super Bowl week in Phoenix, his song "Get Your Game On" is featured on Good Morning Football and Michaels was even a quarterback and outside linebacker for his high school team, the Mechanicsburg Wildcats. This week the singer will be talking to Pennsylvania media ahead of the 50th Anniversary of the Immaculate Reception and release of childhood hero Franco Harris' documentary "A Football Life." Michaels continues to play football at every truck stop, stadium, amphitheater and arena with his band and crew while on tour.

More on Michimich.com
Tickets for Michaels' Parti-Gras dates can be found at LiveNation.com. Exclusive VIP packages with side stage viewing and meet & greets with the singer can be found at ShopBretMichaels.com